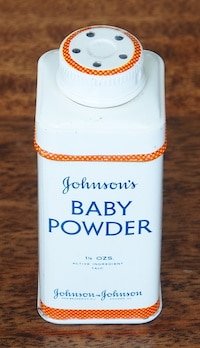 The fragrance of baby powder is distinct and comforting. It conjures images of newborn babies or toweling off after a warm shower. But the reality isn’t quite so idyllic for thousands of Americans who claim that trace amounts of asbestos in talc caused their cancer. Now a new investigation by Reuters argues that Johnson & Johnson, the world’s largest manufacturer of talc-based baby powder, may have known – and covered up – the cancer-causing risk of its iconic product for decades.

Pure and gentle enough for babies’ bottoms.
A product mothers can trust.
Made by a company that puts customers first.

Company documents revealed that Johnson & Johnson knew about possible asbestos contamination in talc as far back as 1957.

Generations of mothers know these are the advertising promises behind Johnson & Johnson’s Baby Powder, the talc product with a fragrance that is among the most recognizable in the world.

But in 1999 it was a much different reality for Darlene Coker. The mother of two and manager of a massage school was dying from mesothelioma, a deadly lung cancer normally found in workers exposed to asbestos fibers while on the job. Darlene wanted to know how she could have contracted this deadly disease.

The answer: the Johnson & Johnson baby powder she used on her daughters and sprinkled on herself all her life, according to a lawsuit Darlene filed against the health care giant. Darlene’s lawyers knew that talc, the key ingredient mined from the earth for baby powder, often occurs with asbestos. But when they requested records from the company, Johnson & Johnson was successful in holding back its own test results on the presence of asbestos in its talc supplies. Darlene was forced to drop her lawsuit before she died at the age of 63.

Now, almost 20 years later, multiple women have successfully picked up where Darlene left off. Decades worth of talc test results and internal memos have been uncovered during recent trials that indicate Johnson & Johnson was not only aware that their flagship product might be tainted with deadly asbestos, but that they also tried to bury the evidence.

Nearly 12,000 cervical cancer and mesothelioma patients have sued Johnson & Johnson, alleging that asbestos found in talc caused their illness. Company documentation from several of these lawsuits show what Johnson & Johnson knew, when they knew it and what they did about it:

Last December, Johnson & Johnson lost a motion to reverse a massive $4.7 billion verdict in favor of 22 women with ovarian cancer who say that the company knew about a link between talc and asbestos.

Missouri Circuit Court Judge Rex Burlison said in his ruling that there was “substantial evidence” of “particularly reprehensible conduct” by Johnson & Johnson, adding that executives “knew of the presence of asbestos in products that they knowingly targeted for sale to mothers and babies, knew of the damage their products caused, and misrepresented the safety of these products for decades.”

Talcum powder can be found in many other everyday items, including make-up.

Baby powder isn’t the only talcum-based product on the market. Talc can be found in many cosmetics and other household items, including:

The U.S. Food and Drug Administration (FDA) does not require cosmetic products and ingredients to be approved before they go on the market. It is up to the consumer to be aware of the talc used in everyday products. For the ingredient list in your favorite cosmetics, check out databases created by The Environmental Working Group or the Campaign for Safe Cosmetics.

Furthermore, there are several safe alternatives to talcum powder. Baby powder made with ingredients like cornstarch, arrowroot powder or kaolin clay are readily available on the market, or you can even make your own! Consider using these substitutes and protect yourself and your family.

The workers, all machinists, represented by Alan T. Friedman of Jersey City’s Bagolie Friedman Injury Lawyers and Paul Garner, affiliated with Jersey City’s Horn Shechtman, were exposed to deadly asbestos fibers while grinding gaskets on a high revolution wire wheel and while working around contaminated rail cars and locomotives. The jury found that the railroad knew about the dangers of asbestos dust beginning in the 1930s and failed warn their workers of the dangers and failed to protect them from the deadly fibers.

LIRR argued that the dust masks were available to the workers, despite the fact that their own Asbestos Awareness Program advised that dust masks were not adequate protection for workers exposed to asbestos. This Asbestos Awareness Program was not implemented until the 1990’s, long after other industries had reacted to their asbestos problems. Additionally, the Long Island Railroad was fined by the State of New York in the 1990’s for failing to implement a Right to Know program to advise their workers of workplace hazards. A Federal law requiring this type of program had been passed in the 1980’s.

“The LIRR treated these workers as if they were expendable or disposable, just like the machines that it was their job to repair. The railroad considered them human overhead. This jury told the LIRR in a loud, clear voice that this is no way to treat your employees” said attorney Alan Friedman.

This is the second time that attorney Friedman has gotten a multi-million dollar verdict against LIIRR for asbestosis and lung disease. Alan T. Friedman has been certified as a Civil Trial Attorney by the New Jersey Supreme Court and is a founding partner of Bagolie Friedman Injury Lawyers, of Jersey City & Clifton, NJ and affiliate offices in Hollywood, Florida and Brisbane, Australia.